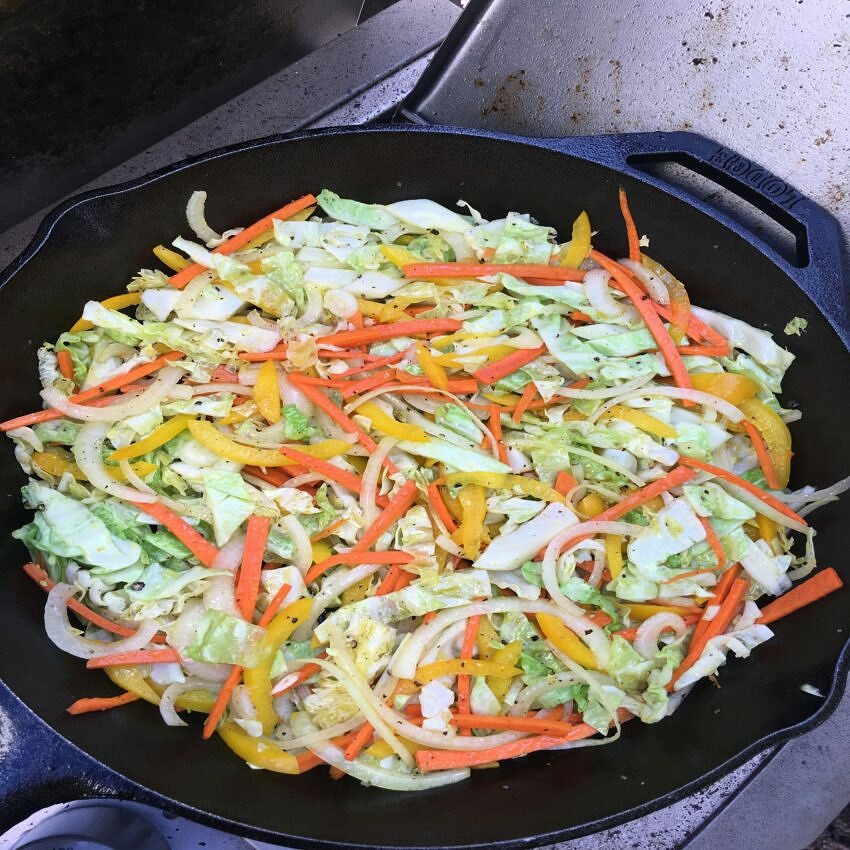 When you mention cabbage, most people think cole slaw. Cole slaw is great, but I sometimes feel that it’s limited. I agree that no two coleslaws are alike, but I feel that the range of choices comes down to two choices, either creamy or deli style (where deli style is more vinegar based). I’m not saying that one is necessarily better than the other like most people dogmatically believe, but depending on the pairing, I feel one is better than the other. For example, creamy coleslaw, I feel, goes better with slow roasted/smoked or braised rich meats like pulled pork or braised short ribs whereas deli style tends pair well with deli style sandwiches like Reubens/Rachels or French dips, but what about lean smoked/grilled meats roasted whole chickens or grilled rib-eyes or NY strip steaks? I feel like there’s a twist on coleslaw that pairs nicely over the traditional creamy or deli style coleslaw for those types main dishes. Enter the cast iron charred coleslaw.

For this recipe, you will need:

Next, julienne both the yellow bell pepper and onion and set aside. Once you have set aside the pepper and onion, take 1/2 head of cabbage, and with the flat side down, start slicing the cabbage opposite end of the stem about making 1/4″ thick slices. Continue slicing until you reach the stem, but do not include the stem. Once you have cabbage slices, continue to cut and julienne each slice until you have something that resembles shredded cabbage.

Place a 12″ cast iron skillet over medium heat and allow to heat up for about 5 minutes. If you have a well seasoned cast iron skillet, you will not need to add any oil to the skillet. The oil used for the cole slaw mixture will suffice. Once your skillet is properly heated, add the cole slaw mixture to the skillet, spread evenly and DON’T TOUCH for 5 minutes. After 5 minutes, lightly stir the mixture before spreading evenly again and then DON’T TOUCH for another 3 minutes. After the last 3 minutes, remove the skillet from heat and empty the mixture back to the bowl, add the red wine vinaeger and lightly toss before serving.