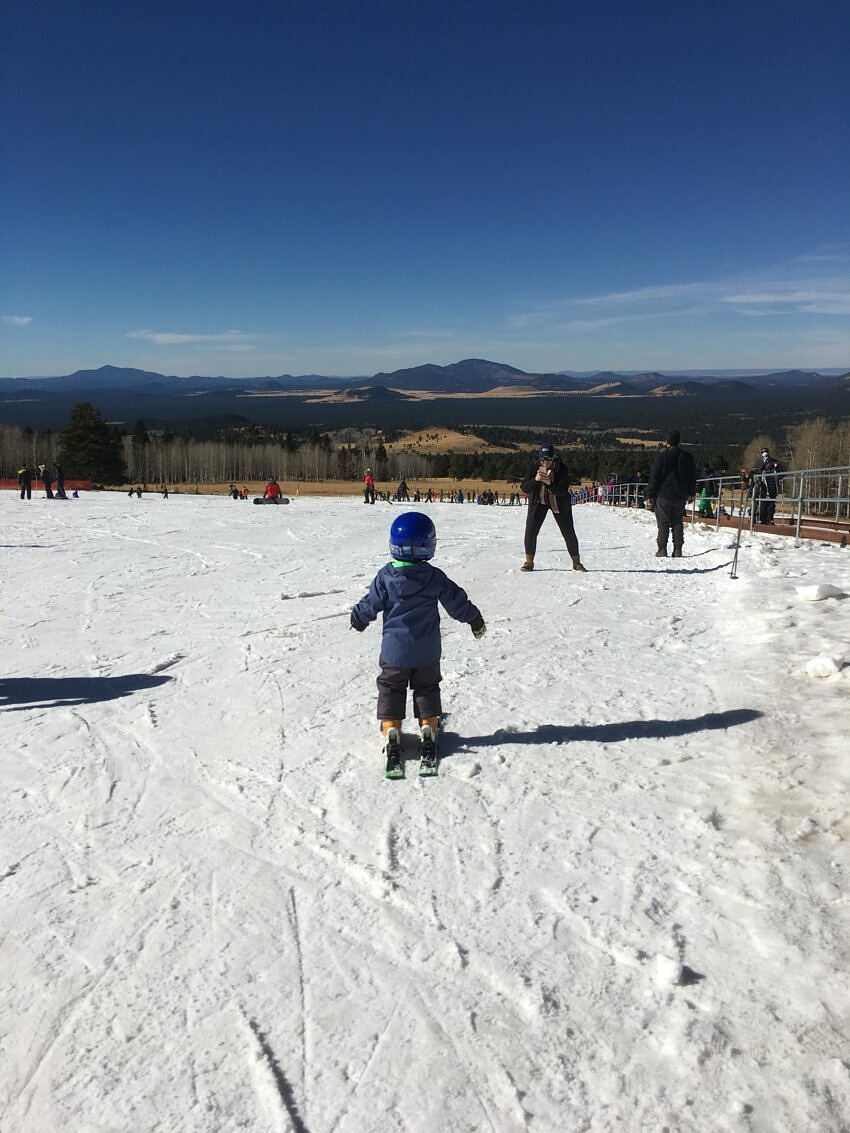 Like most things with my son, I got him started on skis early and often. By the time he was two years old I had him on skis. He would ski between my legs holding on to a ski pole, or mommy and I would take turns catching him as we let him ski down the bunny slope about ten yards at a time. At two years old he had not yet developed the concept of fear, and skiing down ten yards at a time was the coolest thing to him because he would giggle like a loonie every time my wife or I would let go, and when he would ski between my legs, he would shout, “Faster! Faster!”. I guess you can say that he has the thrill seeking gene.

Getting him started as early as possible was probably the best move for us as well as being consistent. Keeping up with each season, by three years old he was skiing on a tether, and then putting him in the local Snowburners class at our local ski area at four years old really solidified him as a skier, but I think getting him started as early as he did was a big plus. By the end of his Snowburners season he was handily doing blue runs at the local ski area. Now my son is five years old for this season, it’s October with the season about to start, and he’s already watching Warren Miller films getting stoked for upcoming season….Kids these days and their ski films.

For me, clothing is a big deal because I want my son to stay warm, but more importantly, I want him to stay dry. Staying dry equals staying warm. I knew that as long as my son stays warm, then skiing will be a fun activity for both of us. Boys are sweaty so I found that layers are the way to go, especially easily removable layers. A good synthetic base layer is what I have found to be one of the most important garments not only for warmth, but for its moisture wicking properties.

For pants, it’s hard not to go with bibs. I have mix feelings about bibs. I like them for ease of putting on and taking off, but I have found some to be on the bulky side, but I’m pleased with my son’s OshKosh B’Gosh – Little Boys’ Bib Snowpant. They have suited him well last season.

The final layer is a good waterproof outer shell. For me, this is the other area where it’s worth not skimping. Yes, they can be expensive because kids typically wear them for one season then outgrow them, but to make this experience “fun” for my son and me, base layer and waterproof shell are probably the two garments I’m willing to pay a little more for. It will pay dividends on the slopes in terms of hours of fun. I’ve found that it’s ok to buy a size or two larger to stretch the use over multiple seasons. My son wore a North Face shell for the first three seasons he was on skis.

In terms of accessories, I put socks up there with base layers and outer shells. I’ve stayed away from bulky wool socks and have definitely steered clear of thick cotton socks too. Cotton socks absorb too much moisture which will make for cold feet, which will make misery on the mountain. Smartwool makes great merino wool ski socks for kids and they’re not bulky socks, which makes sliding on and off ski books much easier. For hands, I’ve found zip-up mittens are great for the ease of putting on, and waterproof is a huge plus. One last little piece of accessory I like for its versatility is a balaclava/buff. It’s easy to pack and it’s a great extra layer to help keep my son’s ears warm while wearing under his helmet.

I’ve found that my son’s current outfit is a pretty good set up, and has been enough to keep warm on the mountain even during non-stop dump powder days. With the occasional stop at the lodge for hot cocoa, my son was outfitted for hours of fun on the mountain.

I will not go into any great detail in terms of gear because not everyone lives in a ski town where one can rent skis for the season, but what I will say is that for ski boots, size up. Getting ski boots on my son the first time was a bit of a pain for both of us. He didn’t know what they were exactly or how to put them on, and me saying, “just push harder.”, didn’t help either. It wasn’t until another dad let me in on a little secret where things go easier. At the early ages, ski boots for kids don’t have to fit like ski boots on adults. Get them one size bigger than what they measure, and you can always fill in the space with an extra layer of socks. Once I learned that, it was like night and day, and skiing became fun. So for ski boots; size up.

One other thing that I think is definitely worth mentioning is a helmet. I always feel that getting a helmet for my son’s noggin is important, and it’s not because I’m afraid he will fall, but more for all the other skiers on the mountain learning to ski on the same hill as my son. I’ve seen way too many accidents on the mountain to realize that it’s most likely going to be someone else running into my son and me than my son just falling while skiing that will cause some hurt. Definitely get the helmet. Besides the helmet protecting the brain, googles protect the eyes. It can get bright on that mountain, and can cause some severe eye damage on adults, let alone young ones. This is one area where it’s dime-a-dozen. I’ve gone through many hand-me-down pairs of goggle before biting the bullet and getting my son his own proper pair, but goggles too are a must.

Getting young ones started on skis early and often is a rewarding thing, and as one of the ski patrollers said in our local ski area said, “You’ll have a ski buddy for life.”, but I’ve found that, like anything else in life, a little planning goes a long way, so as imparting words, have a plan and have a system. One thing that I have found useful is to have a dedicated ski bag. Some people use bins, but for me, a good waterproof duffle works great. I enjoy using The North Face Base Camp Duffel because it fits all of my and my son’s gear including helmets, mittens, jackets, everything, and it’s the dedicated ski bag that holds not only our garments, but snacks and such too. I have found that it makes it easy to keep track of things and when we’re heading out the door for a morning of skiing, I know that bag has everything my son and I will need for an enjoyable day on the slopes.

To make things easier on myself, I’ve developed a quick checklist of things that go into the duffel bag before heading up the mountain.