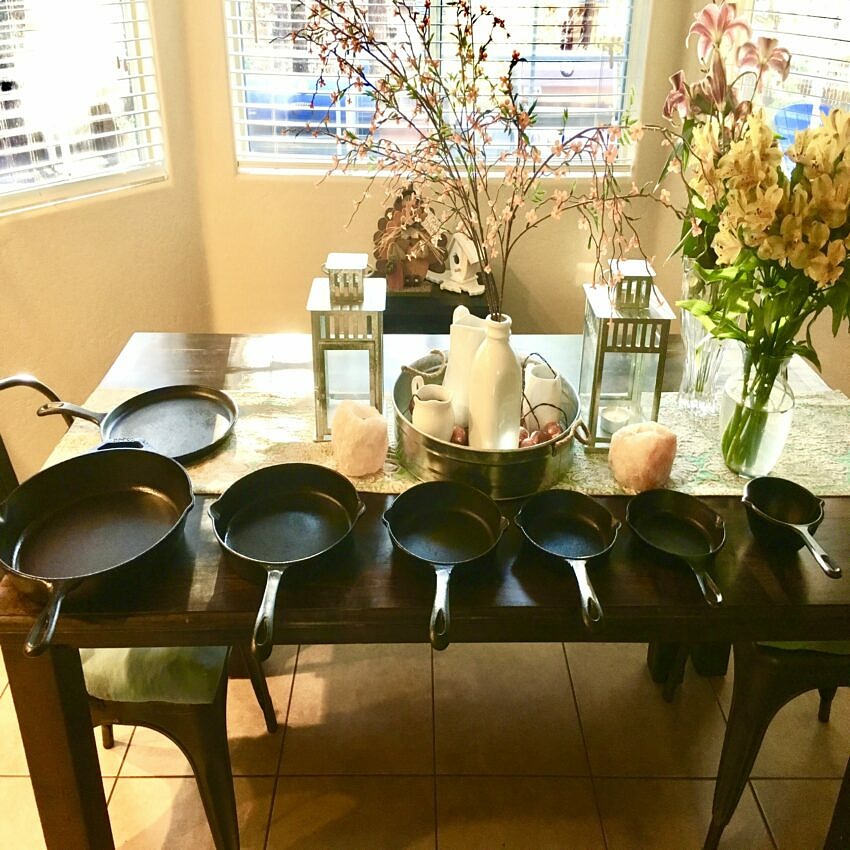 Nothing sears food like a cast-iron skillet, and if cared for properly, it can become the workhorse of any kitchen that will rival any non-stick fry pan. It is the one kitchen tool that most chefs swear by, but in the common household kitchen it seems to mystify most home cooks in these modern times. I blame DuPont for inventing teflon, but I digress. There are three basic rules to stick to when considering the usage and longevity of a cast-iron skillet, and they are season it, use it and care for it.

So you bought your first cast-iron skillet, and you’re wondering what to do with it. Well, the first thing you will want to do is to season it. Now, this doesn’t mean to sprinkle a little of salt and pepper and call it a day. What it really means is to put it through a process known as polymerization. This is a chemical process in which fats or oils are heated in the pan to where the fats or oils become fused or petrified onto the cast iron creating a non-stick surface. The result is that beautiful deep black color that we’ve all come to know and love in a cast-iron skillet.

When you first get your cast-iron skillet (regardless of where you got it), you will want to wash it under warm water with a small amount of soap. THIS WILL BE THE FIRST AND LAST TIME YOU WILL EVER USE SOAP ON YOUR CAST-IRON SKILLET. You’ll want to do this to make sure you clean off any dust or grime that has accumulated on your skillet while sitting in a store and ensure that the surface of the skillet is clean. Once you’ve cleaned your skillet, dry it thoroughly on the inside, outside, the handle and everywhere else. Paper towels should work just fine.

Once your cast-iron skillet is nice and clean and a dry, pre-heat your oven to 350 degrees. Place the skillet in the oven as it’s pre-heating, just to make sure you dry up any small amount of moisture there may still be on the skillet. Once your oven has pre-heated, remove the skillet from the oven, and allow to cool enough to handle with bare hands. Once cooled enough, rub the entire skillet (inside and out and everywhere else), with a small amount of coconut oil (enough to coat the entire skillet). There’s a lot of controversy on what type of fat or oil to use when seasoning a cast-iron skillet, and it’s a discussion that will make friends enemies, divide families, and potentially create civil wars. All I have to say to that is that I have found coconut oil to work wonderfully, but flaxseed oil or shortening are other good options.

Once you’ve coated your skillet with coconut oil, place it face down on the middle rack of your heated oven and set your timer for one hour. When your timer goes off, turn off your oven heat and allow your oven and skillet to cool down completely before removing your skillet from the oven. Once cooled, you should have a beautiful cast-iron skillet ready for cooking.

This rule can not be understated and your tastebuds will thank you in the long run.  The cast-iron skillet is made to be the workhorse of the kitchen. That is it’s very nature, and the more you use it, the better flavor you will get out of it over time, and one good side effect to constant use is that it’s a great source of dietary iron…go figure. There are some things that are obvious to cook in a cast-iron skillet; like bacon and steaks (especially rib-eyes), but less obvious things are equally delicious. Brussels sprouts are a fine example of a less obvious vegetable that can get a nice char when cooked in a cast-iron skillet as well as a Charred Coleslaw. The possibilities are endless, but the key take-away is to use your cast iron skillet early and often.

The last rule is one of cleaning and maintaining, and it’s not much more effort than cleaning any other cookware, only with cast iron, you don’t use soap. To clean a cast-iron skillet, it’s easiest to wash it while it’s still warm. Wash your skillet under warm water, and scrub it using a stiff bristle scrub brush. For more stubborn bits that are stuck to the skillet, you can use coarse kosher salt and scrub using the scrub brush. For those stubborn bits, it is also useful to use a pan scraper tailored for cast iron skillets.

After you have washed your cast-iron skillet, be sure to dry it thoroughly. Once the skillet is clean and dry, rub it with coconut oil (inside and out and all over) the same as when you seasoned it, and place on a stove burner over medium heat. Once the oil on the skillet begins to smoke, turn off the heat, but leave it on the burner; wipe any excess oil and allow to cool on the burner. This will ensure that your skillet will always remain seasoned, which will safeguard it from rust and prolong its longevity.

1 thought on “The Secret to Cast Iron Cookware”